Errol's most treasured past time was that of photography. Throughout his later life and on many of his bush walking treks, he amassed a wonderful collection of unseen landscapes, high plains huts and wildflowers. Links to these photos will soon be added and Flynn will then take you to some of these unique places.
EULOGY OF ERROL ‘FLYNN’ WHITE

Written by and read, on behalf of the family, by Ian White, elder brother of Errol at his funeral, on Wednesday, 26 March, 2008, at the Uniting Church, Maddison St, Mt Beauty.

"Somehow, I have a feeling that I will not be the most popular person here today, when I tell you that I used to beat Flynn up as a kid. It didn’t do him any good though as he still used to cheek me back. He was a fair dinkum little bugger in his early years but I guess he did improve with time. So I wish now, to tell of the life and times of my dear younger brother, Flynn, or as he was named at birth, Errol Bernard White, born at Yackandandah on 10 November 1942. 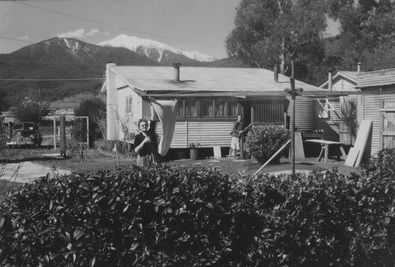 Married there in New Zealand, the first of three boys, Dean, soon arrived, and the other two, Vaughan and Aaron, were born in Tawonga South. This is where he and Helen settled into a modest little house that was built by his grandparents, up “Petticoat Lane“, with a magnificent view, of what was to become his dream mountain, “Bogong“.

Flynn was now back in the hills where he was brought up, and began working for the State Electricity Commission as a “Linesman“,  where he enjoyed the outdoor lifestyle, and trained very hard over many years for advancement and the development of his electrical skills. His fondest memories of these times were of his dedication to his electrical work, and along with his special band of workmates, attended to all electrical faults (callouts) at any time of the day or night, and in any weather, all throughout the Kiewa Valley and the Northeastern District.
It was in 2002 that whilst on one of his many walking trecks, in the wilderness of Tasmania with a merry band of stalwarts who became so very dear to him on numerous happy bushwalking occasions, he returned home to be made aware of the unkindest diagnosis a person can receive. Called in for a report by his doctor, his life expectancy was at worst months, and at best a few years. From that moment he took up the challenge to survive. By surviving the six years as he did (and I can tell you, that in this time, he underwent heartbreaking moments and tortuous discomfort, and clearly made some very courageous decisions against some very sad odds for major surgical undertakings.

During the six years, he quietly and particularly, set about adventuring into places that few people go, nor are even aware of, camping and trecking for days on end. To assist his ventures, he secured camping mobility in the form of “Roxanne” the “Hi-Ace” campervan. This van became part of his soul. Along with Flynn, it has now breathed the dust of the Nullabor Plain through to Perth, stood alongside Uluru looking up at him coming down ‘the Rock’, parked nervously beside Alligator River through Kakadu, has waited patiently for him to re-appear from the underground mines of Mt Isa, choked at coal dust in Central Queensland, waited anxiously for his helicopter to return from a tour of the Whitsundays. I have to tell you that this helicopter flight was his first. He gallantly resisted my efforts to entice him up in one of his biggest fears. He was so scared of a rotor cutout, and plummeting headlong into shark infested waters. In final desperation I blurted out “well, with what you’ve been through lately, a fiery death can’t be all that worse. He agreed and I am so pleased to say he thought that the helicopter ride was one of his big thrills in life. So much so, he willingly accepted another helicopter buzz along the Katherine Gorges with Jude and I not long after.  I suspect he was seeing and enjoying his wildernesses from a different perspective. Next I learn he has gone up in a seaplane around the southern wildernesses of Tasmania, and lately, “Roxanne” was seen patiently biding her time waiting for Flynn to make the many kayaking discoveries down mountain gorges and through coastal backwaters along the eastern coastal fringe.

Throughout these past few difficult years, Flynn told me of the dedication and support of Helen (who he affectionately called “Polly”) labeling her effort “Trojan”. To me that meant Helen had a mindset for ensuring Flynn received the best care, whatever and whenever needed. The devotion and care Helen gave to ensure Flynn came through his more difficult moments, I feel sure, gave Flynn the best chance to extend his time with us.

Each of his three boys spent quality time with their dad. Dean and Flynn often went out fossicking with a metal detector for old coins, panning for gold around the mountain streams and digging for semi-precious stones, each thrilled by the prospect of an exciting discovery. Vaughan enjoyed the many outings of camping and bushwalking and Aaron learned to fish expertly from a dad who grew up with a love of fishing.