Marbuck Pool
Many of the older boys would tire of the swimming crowd and journey upstream over rough rocks and bush from the Rock pool and swim in what was known as the Marbuck. Just recently, being curious about the origin of the name Marbuck, this is what I have researched.
Marbuck was the aboriginal boy in the first colour film produced in Australia in 1955, "Jedda". Marbuck takes his girlfriend Jedda, raised by a white family, away after his tribe denounce their untraditional union. They are hunted by an Afgan/Aboriginal stockman, who loves Jedda, so the couple go to the top of a gorge and throw themselves off as they think that they will be together in spirit.
Spider's Cove
Another swimming hole on the East Kiewa river was known as Spiders Cove by local kids or Mulloga (deep pool) by aboriginals from time gone by. The local kids called it Spiders Cove due to the giant rock spiders inhabiting the rock faces. The spiders were about the size of an open hand. The swimming hole was situated about 700 metres upstream from the Marbuck, directly below Cranky Charlie.  The pool was not frequented much due to the high cliffs and the deep pools. Old timers said it was bottomless and that aboriginal legend said it was inhabited by a mulloka (evil water spirit). Of course that scared the hell out of us kids. A beautiful long deep pool surrounded by high cliffs, but we used to swim the length of it with a great deal of trepidation. 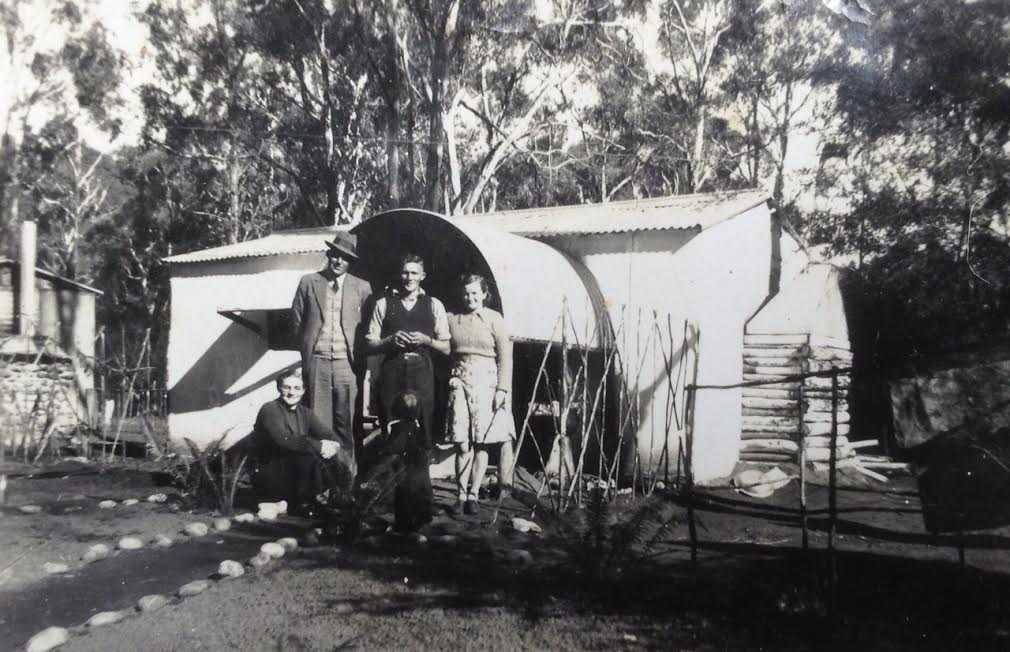 Joyce and Charlie Roberts and Gordon and Hazel White, pictured above, were two families that built their homes out of flour bags, corrugated iron, tree logs and dirt floor at this location just 50 yards from the Mermaid Pool. Charlie and Gordon were carpenters on the Kiewa Hydro Scheme. They lived here while they helped build the first SEC housing, Lower Bogong Village which was near the Clover Power Station, completed in 1940.
Diane Pool
The Diane Pool on the East Kiewa was situated basically between the mermaid pool and the scout pool.  It was accessed via the rock pool road down a steep gradient via which you could drive your car to the rivers edge.  You could also drive across the river at this point  to access the rifle range and the target area.  There was a flag pole and a sign warning of the rifle range.  You could access Mountain Creek via this road but it was rough.  It was  very popular with Moms and Dads who had little children as it was  relatively shallow and safe. A beautiful area.  About 200 metres east of the pool was evidence of previous habitation with a brick stack about 2.5 metres high.  Whilst we all thought it was remnants of a chimney, we were told it was the remnants of an old sewerage pit.  Obviously, there were shacks or dwellings here at some point in time.
Scout Pool
Further downstream the East Kiewa River was a pool known as the Scout Pool. This pool was long and narrow and had blackberries all along the banks. We would sit in the cool water on a hot day and gorge ourselves, ending up with blackberry juice from head to toe.
Old Bridge Hole
The Old Bridge Swimming Hole was situated on Damms Road which about 1 kilometre at right angles to Valley Avenue and Nelse Street at North Beauty. The old bridge crossed the East Kiewa River at that point. The bridge was the old access to Damms Road taking you to Mountain Creek Road, which was the back way to Tawonga, Mountain Creek and the west end of the rifle range. The bridge was built in the very early 30’s and in the 50’s vehicles traversed it with care. The river at this point was magnificent with a shallow, long nearly 50m wide pool on the east side of the bridge with deep pools situated on the western side of the bridge. The deep pools extended for some 100 metres and from the bridge you could see clear to the bottom (4-5 metres). The sand lining the river was pure white and there was no moss on the rocks. The swimming hole was most popular in the 50’s both for swimming and fishing. However, over time the river changed, the deep pools disappeared and the old bridge was swept away by flood. Today, it is no resemblance of what it used to be.
Mud Pool (The King Of All Pools)
The Gorge
The Kiewa River Proper
CRB Lane
Tawonga Rock Pool
Redbank Hole
Keegan's Bridge
Back To Mt Beauty Menu