Jack Dean had made an 18-foot boat he called the “Doris” after his eldest daughter. Mum, all the kids, the little dog Turk and even an occasional visitor could all go in it together. It was a good boat and well made. Mrs Dean didn’t row. She had only one good arm having been crippled by polio when she was a child. If there was a likely nest in a tree Jack would bump the boat against the trunk. A hollow in the tree with duck down around the opening showed that ducks were nesting there. A duck in there sitting on eggs would fly out when the tree was knocked. Then one of the boys would climb up, take out an egg and pass it down to Jack. He would tap it gently to listen if it was any good. They would take all but 2 or 3 eggs and go home at night with as much as a kerosene tin full. That was the family’s feed for a week.

Once in flood time the family went up Summer’s Creek, upstream from Boundary Bend, looking to get some duck eggs. The water was fairly rushing in the creek as well as the main river, the current was very strong. Bob Dunne, a family friend, was with them and Jack left Bob and the kids while he went with Mrs Dean to check out the trees. It would be easier to manage the boat in the fast flood with only one passenger in it. Jack said to his wife, "Quick, bob down there’s a low branch." She wasn’t quick enough and grabbed at the branch with her good hand as the boat speared on, leaving her hanging there with her body in the rushing water. Jack was good on the oars but had no hope of backing up in the fast water. He would have to go back up along the bank and come down in mid stream to come under his wife again. 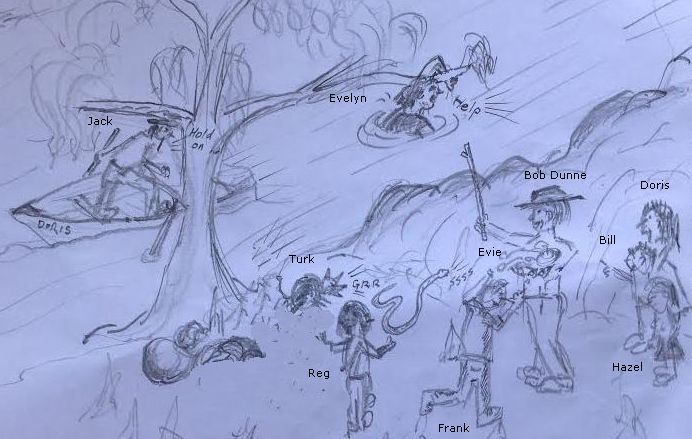 Depiction of the scene
Bob was holding the baby (Evie). He wanted to drop her and swim out to help Mrs Dean and in the panic the dog started barking at a tiger snake. Bob tried to grab a stick to hit at the snake and Frank was trying to grab the baby. The younger kids were howling. Jack was yelling to his wife "Hold on there!" and she was hanging on for her life. Jack came back down in the current and grabbed Mrs Dean, Frank got the baby, the boat hit the tree hard but didn’t break and everyone was crying with relief when they got onto the bank together. They went on after a while and got a fair lot of eggs but they didn’t remember the day as a good time.
Back To Murray River Menu